Did you get your free cigars?

Posted by Corona Cigar Co. at 9:50 AM No comments:

We wanted to make a cigar that was 100 percent American. We only used tobacco grown in America, rolled in the country’s oldest cigar factory, in Ybor City, Florida. Everything from the boxes, to the bands, and even the cellophane is produced in the United States of America. We are excited and very proud to share this cigar with you, so rightfully named The American.

Did you get your free gift set?

Posted by Corona Cigar Co. at 9:58 AM No comments:

[Video] ever been to the JC Newman Factory?

Brick House is an old brand with a storied history. Long before it represented Nicaraguan puros, it represented Cuban puros. Those days are gone, but not forgotten, because the high quality found in the cigars from those times has never disappeared. The new addition to the line, the Brick House Connecticut Cigar, is a milder version of the almost legendary brand name. Wrapped in a golden brown wrapper, this cigar offers a mix of mellow and sweet flavors, including toast, cream, and cedar. It is still rich enough not to be considered mild strength, though. Presented in a simple box and smooth to the touch, the Brick House Connecticut Cigar is easily a daily smoke cigar. Due to the sweetness, we recommend it either as an early treat immediately after work or a late night smoke in place of dessert.

Posted by Corona Cigar Co. at 9:54 AM No comments:

Posted by Corona Cigar Co. at 9:59 AM No comments: 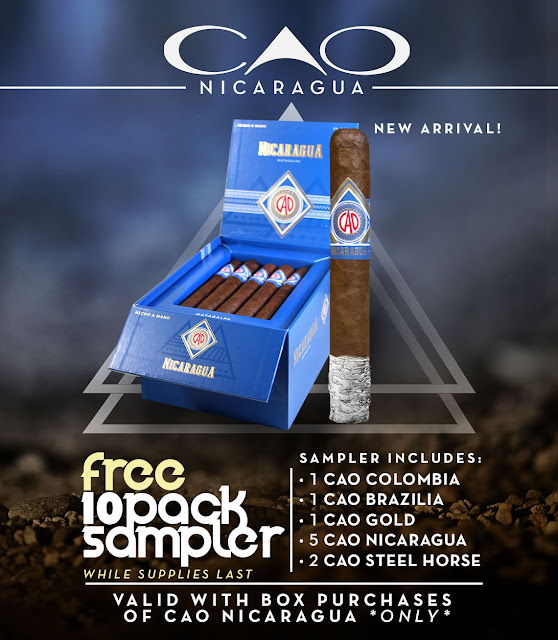 Save up to 56% OFF select boxes of Macanudo, Cohiba, and Partagas! This annual event is quite the treat. We've dropped prices on these select boxes for 6 days only. You won't find better deals anywhere else. Shop the selection below, add to your cart, and enjoy premium cigars at crazy discounts!
Ends 02/20/2019 at 11:59PM EST
Cannot be combined with any other offers or promotions
Limited Time Offer | Online Only
Posted by Corona Cigar Co. at 9:59 AM No comments:

Valentine's Day Special ❤ 14% Off Your Order

Happy Valentine's Day!
Save 14% Off Your Order

Posted by Corona Cigar Co. at 9:57 AM No comments:

Tobacco Business Magazine held its second annual Tobacco Business Awards at an exclusive invite-only ceremony held in Las Vegas on Feb. 11, 2019. This year’s event took place at The Sayers Club within the SLS Las Vegas Hotel & Casino and had close to 270 premium tobacco retailers, manufacturers and media in attendance.
Held in conjunction with the Tobacco Plus Expo (TPE), the Tobacco Business Awards was designed to honor and recognize exceptional businesses, professionals, and products of the tobacco, vapor and alternative industries. This year’s ceremony was a full-on featuring of who’s who within these industries as the magazine announced the winners of the 2019 awards. This year’s awards expanded to 12 categories that could be voted on by the magazine’s print and digital readers and one non-publicized award given to an industry icon that was announced and revealed for the first time during the ceremony. New categories introduced at the 2019 awards included Nicaraguan Cigar of the Year, Dominican Cigar of the Year, Boutique Cigar of the Year, Accessory Manufacturer of the Year, Tobacconist of the Year and Woman of the Year. This year’s awards had close to 8,000 votes, nearly four times the votes of the 2018 awards.
“This isn’t an easy industry to do business in; success comes with hard work, sacrifice and many hours spent on building something that often starts out as nothing but an idea or dream. We view the awards as a thank you to those who’ve have helped make this industry what it is today and to those who continue to help us shape Tobacco Business and Tobacco Plus Expo,” says Ben Stimpson, managing director of TMG International, the publisher of Tobacco Business Magazine and owner of the TPE trade show.
NICARAGUAN CIGAR OF THE YEAR
Drew Estate Florida Sun Grown (FSG) by Drew Estate
The FSG by Drew Estate is something we hold near and dear. The first cigar that featured tobacco from our Florida Sun Grown tobacco farm is still kickin’ ass, taking names... and awards!
Posted by Corona Cigar Co. at 9:54 AM No comments:

Posted by Corona Cigar Co. at 9:55 AM No comments:

Posted by Corona Cigar Co. at 9:53 AM No comments: