Have you tried Florida Sun Grown tobacco yet? Check out our selection! FREE SHIPPING with your order of $50+ 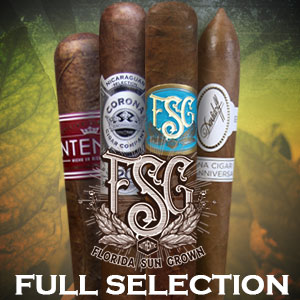 After five years of planning, trials, successes and setbacks, hard work and dedication, we are humbled and blessed to able to share with you Florida Sun Grown cigars.
For nearly 175 years, Florida had a rich and storied history of growing some of the world's finest cigar tobacco. Florida was once the second largest producer of premium cigar tobacco in America. There were thousands of acres grown just north of Tallahassee in the towns of Quincy and Havana, Florida. In fact, the reason they named the town Havana, was so that unscrupulous tobacco brokers could label Florida grown tobacco bales as being grown in Havana and sell it at a premium to unsuspecting cigar factories all across America as the more expensive, imported tobacco from Havana, Cuba.
In the 1890's, Cuba was fighting for their independence from Spain. To escape the war and the blockade on Havana harbor, some Cuban tobacco growers established large tobacco farms in Fort Mead, Florida so they could continue to supply American cigar factories with tobacco. With Florida having a very similar climate, altitude and close proximity to Cuba, their tobacco farms thrived.
Unfortunately, due to the invention of the cigarette and the gradual decline in cigar consumption, the resulting closure of thousands of American cigar factories, the invention of homogenized tobacco wrappers, the high cost of American labor and the low cost of foreign labor, it was no longer economically feasible for Florida's farmers to grown cigar tobacco. For the next 70 years, the cigar industry continued to get smaller each year and as a result, the last crop of Florida cigar tobacco was grown in 1977 on a farm in Gadsen County, Florida.
As a proud American, I believed it was possible to bring cigar tobacco farming back to Florida, on a small-scale, limited production way. As a cigar retailer, I believed consumers would be willing to pay a little more for a cigars that contained genuine Florida grown cigar tobacco, as long as the tobacco was unique, distinctive, flavorful and of the highest quality. Fortunately, our Florida Sun Grown tobacco has all those qualities and more.
So in 2012, Corona Cigar Company purchased a 20 acre plot of farm land 30 miles west of Orlando, in the town of Clermont, Florida. We began clearing the land, prepping the the soil, constructing our unique tobacco curing barn, installing irrigation and purchasing equipment.
In 2013 we planted our first test crop of Cuban seed Corojo tobacco not knowing what the results would be. History as well as science told us that we could successfully grow cigar tobacco in Florida and fortunately, our test crop proved that with nature alone, we could grow good tobacco. With proper funding, research, modern agriscience combined with time honored, proven methods of cultivation, and a lot of hard work and a dedicated team, we could grow GREAT tobacco.
Since that first test crop we have grown six successful crops to date. Each year we continue to improve as we make adjustments to adapt to our unique growing environment. Our hard working, all-American farm team understand what it takes to make a premium cigar. They take take pride in growing the finest tobacco leaves and they know, years later, their tobacco will bear the Florida Sun Grown name on world class cigars.
FSG by Drew Estate cigars are hand crafted in small batches at Drew Estate's Gran Fabrica in Esteli, Nicaragua.
The Florida Sun Grown line was blended by Drew Estate Master Blender Willy Herrera over the course of the past two years, during which Drew Estate has been fermenting and processing the new Sun Grown tobaccos. When asked about the new tobacco, Willy stated that, “it was a unique challenge working with the Florida Sun Grown tobacco. It was something completely new to me, and it took me numerous blends to figure out how to incorporate it into a blend I really loved. The final blend we’ve come up with is one I’m extremely excited about, and I can’t wait to see what everyone thinks of this special new tobacco.
FSG by Drew Estate cigars have a three country blend of tobacco. The long filler has authentic Florida Sun Grown Corojo '99 ligero tobacco from our 2014 crop combined with seco and viso tobaccos from Nicaragua. The Habano binder is from Honduras and the cigar is finished off with a lush Arapiraca Maduro wrapper from Brazil.
Also offered in limited quantities is the FSG Limited Edition Trunk-Pressed Toro (6 x 54) with an MSRP of $150/10ct box. This limited edition size features its own unique blend, which utilizes a Connecticut Broadleaf wrapper, Mexican binder, and Florida Sun Grown filler tobacco, along with fillers from Nicaragua and Honduras.
It has been nearly forty years since any cigars were made with Florida tobacco. We are extremely happy to be able to bring back one of America's finest tobaccos and reintroduce the unique flavor of Florida tobacco to cigar aficionados world wide. We hope you enjoy these special cigars as much as we do.
--------------------------------------------------------------------------------------------------------------------------------------------
Florida Sun Grown tobacco is exclusive to Corona Cigar Co. After the release of FSG Cigars, people loved the new Florida tobacco and really enjoyed the unique taste when smoking the cigar. We couldn't restrict Florida Sun Grown tobacco to just one cigar so we began adding it to 3 others: Intensa FSG, Davidoff Corona 20th Anniversary FSG and Corona Nicaraguan 20th Anniversary FSG. It's only fitting that we celebrate 20 years of being in business with one of our most prized possessions. Make sure to try one of our four exclusive yet beautiful cigars containing FSG tobacco today! FREE SHIPPING with your order of $50 or more - Enjoy!
Posted by Corona Cigar Co. at 9:58 AM