Winston Churchill was the most famous cigar smoker in history

Winston Churchill, the great British statesman who led his country during the darkest days of World cigars. According to his profile in Cigar Aficionado, he discovered the joys of cigars while visiting Cuba as a war correspondent in 1895, covering the rebellion against Spanish rule. Thereafter he would consume between eight and ten cigars a day, though he would often allow them to burn out so that he could chew on them. He has an entire room at his home at Chartwell in which he regularly kept between 2,000 and 4,000 cigars at one time. 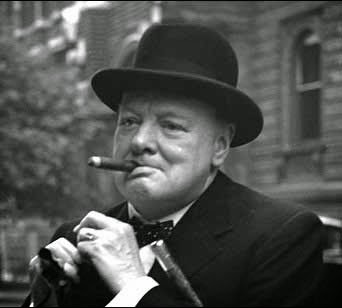 War II, was rarely without his favorite

As with most cigar fanciers, he preferred Cubans. He typically smoked Romeo y Julieta cigars as well as La Aroma de Cuba. He often smoked his cigars with a glass of brandy, combining two pleasures at once. He made certain that he was never far from his favorite cigars or deprived of them for very long. On one occasion, during a high altitude air flight, Churchill had a special oxygen mask devised so that he could continue happily puffing away in an unpressurized cabin at 15.000 feet.

On another occasion, when attending a luncheon with King Ibn Saud of Saudi Arabia, Churchill was informed that neither smoking nor drinking was allowed in the royal presence because of the king’s Muslim beliefs. Churchill duly informed the king that smoking and drinking were as sacred a rite for him, and the abstinence of the same was for His Majesty. Ibn Saud graciously accepted the point.

Churchill has been associated with cigars perhaps more than any other celebrity in history. Few photographs exist of the British statesman that do not include a cigar between his teeth or smoldering between his fingers. So great is the association that his name adorns a number of cigar brands.
Posted by Stans@coronacigar.com at 1:39 PM