Today, we're looking at a new cigar from Montecristo, called Monte. As many of you know, Montecristo has a long storied history. You can check the cigar history section of the blog for a more in depth look at the brand and its history. The Monte is quite the impressive cigar, so let's dive in and take a look. 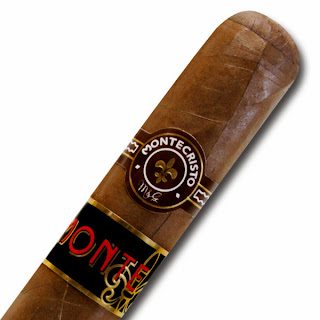 Pre-light:
The cigar uses an Ecuadorian Habano wrapper that's quite impressive. I couldn’t find any flaws in the wrapper, and it has a nice oily patina finish to it. A double binder from Nicaragua and the Dominican Republic encases a blend of long fillers from the Dominican. The cigar feels firm in the hand, and I haven't noted any soft spots in the cigar.

Light and First Third:
I'm smoking the 6x60 size and it lit quite well. I used an extra long cedar match and in no time smoke was bellowing off the foot. I was greeted with a nice profile of baking spices right out of the gate. They were strong, but not overpowering and very pleasing on the palette. The second wave revealed lots of nice floral notes. They were light, but prevalent, and notes of sweet prunes were found alongside it. Towards the end of the first third, the cigar turns to a more peppery profile with cinnamon tones in the background.

Second Third:
The second third of the cigar continues on with a light peppery backbone with touches of spice. The cigar is smoking very smooth with lots of smoke still coming off the cigar. The draw has been great and the burn is nice and even. I'm attributing the aromatic spices to the Dominican Olor binder that’s used. It's very flavorful and adds to the cigar profile quite nicely. The Nicaraugan Corojo, which is the second binder used, is adding lots of depth to the cigar with a nice peppery aftertaste.

Final Third:
The cigar is a break from the regular Montecristo lines. The Monte, to this point, is very robust with lots of complexity and flavor. The cigar has performed perfectly in every category, as you would expect from a Montecristo cigar. At this point, I’m picking up notes of nuts, spices, and a touch of orange peel. The peppery notes are still showing through, but are much more balanced in the final third of the smoke. The Monte finishes out with a refined, rich spice and a black pepper overtone.

Final Thoughts:
This is an impressive smoke that's equally balanced from start-to-finish. It's an excellent cigar if you're looking for a mid-afternoon to late night smoke. The cigar has loads of flavor that keep you intrigued from the get-go. I'm adding the Monte to my new personal favorite list, and it will become a regular in my humidor. While it breaks from the traditional Montecristos, it's a definite winner and you should enjoy it, if you like robust flavorful cigars. It's a must-smoke cigar in my book. Give it a try and let me know what you think.

Order Your Monte by Montecristo Here!
Posted by Musings Of A Cranky Old Man at 2:40 PM