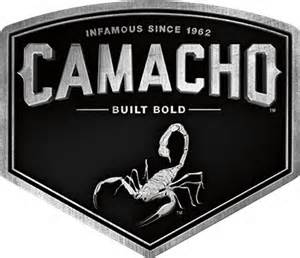 Camacho: Re-Blended & Re-Branded
Camacho Cigars are world renowned for making some of the finest full-bodied cigars from Honduras. With a storied history that dates back to 1962, Camacho has recently undergone a complete re-blending of their cigar lines, along with an all new updated look. Keeping with their classic Camacho profiles, these new cigars are just as bold and flavorful, if not more so. Ranging from the milder Connecticut to the new Camacho Triple Maduro line, these cigars hold true to the Camacho roots but with a new twist. I've reviewed three of the new lines and will follow up in the weeks to come with the rest of the newly released blends. I hope you enjoy. Please feel free to share your comments and thoughts at the end of this blog post. 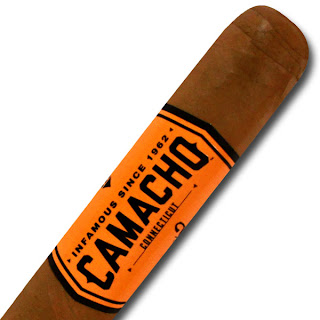 Camacho Connecticut Cigars
Pre-light and Blend Profile:
Taking a look at the wrapper, it appears to be flawless. The seam is virtually none existent, it blends in perfectly. I'm smoking the Robusto size for this review, which comes in the standard 5x50 size. A quick check on the construction reveals a firm and stout cigar with no soft spots. The wrapper used is an Ecuadorian Connecticut; it has an oily light appearance. Constructed in the traditional Cuban-style, it features a triple cap. The binder is Honduran and the fillers are a blend of Dominican and Honduran long-fillers.

The Camacho Connecticut starts out with a bit of spice on the tongue but after several minutes it disappears into the background. A creamy smooth cedar note takes over and is quite pleasing. Bits of spice are still evident, but they remain in the background. At the one inch mark, a pure white ash is forming with slender lines of black peaking through. I've picked up several notes of the nutty nature and slight hints of what reminds me of rum.

Entering the second third of the cigar, the spice tones have picked up and the cedar notes still remain. At this point, I would say the cigar has built up to a medium-bodied overtone. Nothing overpowering, but definite tendencies in that direction. The draw is very smooth; I haven't had to work hard at creating vast amounts of beautiful white smoke. At the end of the first third, I begin noticing a slight tone of fruit. It's faint, but present and worth noting.

The final third marks a similar profile that has been noted thus far. The flavor has remained very consistent throughout. Light tones of coffee are found and are flavorful. The burn has been impeccable, remaining cool and consistent. If you enjoy Honduran cigars and have been a fan of Camacho Cigars in the past, you will love the revamped Connecticut line. This medium-bodied cigar gives you a classic Connecticut profile with a bit of kick to it. This is a well made cigar that can be smoked anytime of the day. 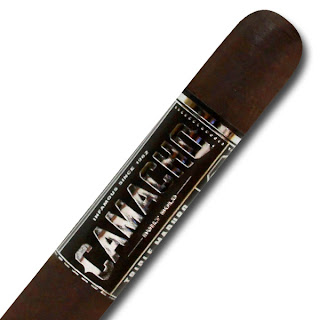 After taking a look at the wrapper, I couldn’t help but feel the need to sit down and smoke this one. A rich dark-colored Honduran Maduro wrapper is used. It has a slight sheen to it. In fact, Maduro leaves are used for the binder and filler, as well. The feel to the cigar is quite firm and once again like on the Connecticut, it appears to be seamless and is finished in the traditional Cuban-style with a triple cap. Like the Connecticut review, I'm smoking the Robusto size 5x50.

Flavor Profile and Tasting Notes:
The cigar starts off with quite a bang. Rustic earthy notes and leather are predominate. Like the motto on the cigar bands states, “Built Bold”, if the start of the Camacho Triple Maduro is any indication, then this is going to be one of the boldest cigars that I've smoked in some time. As I work my way farther in, notes of baking spices emerged. As I mentioned earlier, the cigar has a very firm feel; I was afraid it might interfere with the draw. I'm happy to say that I've found it to be quite the opposite.

The draw is perfect and I haven’t had any issues. The burn is slow and cool with lots of smoke being noted. A gray ash has formed now and I'm about an inch into the smoke. The cigar is dominated with a dark earth and spicy overtone. The flavors are rich and hardy with an undertone of oak that's smooth. Rounding out the first third, expect it to be consistent and full-bodied.

The second third comes with the same profile continuing to be full-bodied. You definitely want to smoke this cigar after you have eaten. A spicy sweetness has begun to emerge that adds quite a bit to the cigar. The aroma coming off is very pleasant. You will notice lots of baking spices on the palette after the draw. It's pleasing and continues to add to the smoking experience. The ash continues to hold a full two thirds of the way in. It's taken on a more “shaggy” appearance with beautiful plumes of smoke still bellowing off the foot.

The final portion of the cigar is smooth with earth, leather, spices, oak, and a slight sweetness still remaining as the core profile. The cigar, however, is complex and if you have an experienced palette, you will be able to find many other notes and tones. If you're a full-bodied cigar lover and you enjoy Maduro cigars, this will quickly become a must smoke for you. It's smoothness and rich hardy profile will make this an instant winner for Maduro lovers. 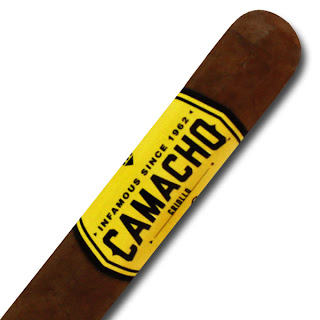 Looking at the Camacho Criollo cigar, the first think you will notice is the large brightly colored  label featuring a yellow background and black lettering. The wrapper is a Honduran grown Criollo 98 fourth priming. It has a very natural look with very slight veining and is tightly wrapped. Like all the Camacho cigar lines, it has the classic Cuban-style triple cap. The finish is what I call, “satin” and falls in between a matte and an oily finish, which gives the cigar a soft sheen look to it. The binder is a Honduran Corojo and the fillers are Criollo 98, Piloto Cubano, Honduras, and Dominican Republic. It has a firm feel to it and is lighter in weight than the Triple Maduro, that I just reviewed. Like the two previous cigars, I am smoking the Robusto size 5x50.

Flavor Profile and Tasting Notes:
Lighting up, I instantly started to get a sweetness on my palette. It's very pleasant and something I wasn't expecting. The draw is very airy, yet not to the point where it feels that you are just drawing on air. It's very acceptable and allows for a quicker burn on the cigar. Gentle notes of spices have started to culminate and I've begun to get a touch of white pepper on the palette. A full third of the way in and the burn is spot on. Vast amounts of bluish gray smoke flow off the foot of the cigar, releasing pleasant aromas.

Entering the second third portion of the smoke, the cigar has remained medium-bodied. Tones of almonds have entered the profile, along with a very smooth walnut undertone. A full two and a half inches in and the ash is holding tight. The burn line is remaining dead even. The draw continues to be light and airy making for a quick burn time. I do want to note that unlike other cigars I have smoked in the past that tend to burn fast and crack the wrapper, the Camacho Criollo burn remains cool and has no adverse affect on the cigar in any way.

The final third is just as smooth and flavorful as the first two thirds. Continuing with the medium-bodied profile, it performed admirably. Bold tones, along with a smooth underling smoke, the Camacho Criollo is an excellent cigar you could enjoy from late morning on. If you're more of a full-bodied cigar smoker, this would make an excellent alternative if you want to smoke something in the morning along with your favorite cup of Cuban coffee. For myself, I will definitely be adding this cigar to my humidor and use it as my after lunch cigar.