Today, we are looking at the Dominican 10th Anniversary cigar line, from Corona Cigar Co. These cigars are all handmade and use only premium long filler tobaccos. Let’s explore and see what we find. 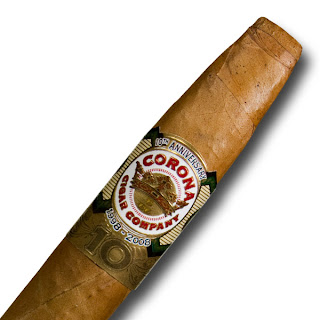 Corona Cigar Co. 10th Anniversary Wedge Connecticut
The first one up is the Wedge Connecticut. I'm smoking the 6x54, for the review. The price is exceptional at $5.50 for a single, it won't break the bank and you can afford to smoke this cigar everyday, all day. Now, let's take a more detailed look.


On my inspection of the cigar itself, I found a grassy hay aroma. The aroma is that of sweetness, akin to wet dew and grass. The Connecticut wrapper is premium without a single blemish on it. As a side note, if you have never smoked a wedge style cigar, if nothing else,  pick up a few of these sticks just to try it out. I have found it to be very enjoyable and a nice change from your standard round cigars.


Toasting the foot of the cigar, I found cream and toasty notes. The cigar lit very well and the draw seems to be exactly how I like it. Semi-loose, but with enough tightness to make you work a little. I'm picking up ever so slight hints of  spices and cracked pepper. Those tones pick up at about the halfway point and carry throughout the rest of the cigar.

While it's not overly complex, expect lots of cream and toasty notes with hints of nuts and light spices. I was able to get a two inch ash on the cigar and the burn remained consistent. The cigar is well worth picking up and giving it a try. It would make a perfect everyday smoke. 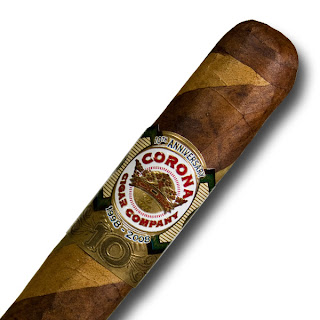 Corona Cigar Co. 10th Anniversary Phatso Tres Capas
The Corona Cigar Companies, Phatso Tres Capas, is a magnificent smoke. A perfectly balanced cigar made up of a golden brown Connecticut, Maduro, and Candela wrappers that are expertly rolled together. The makeup of the cigar is Dominican fillers and a Nicaraguan binder. Also known as a barber pole style, this particular cigar type takes about twice as long to roll given the complexity of having to roll three different wrappers. I'm smoking the 5.5x60 and you can buy a box of 20 for $69.95.


Given the large ring gauge, sometimes it takes some work to get a cigar of this size lit. Not this cigar - I was able to light it up with relative ease. The ash is white and gray and somewhat flaky. Expect toasty notes with hints of citrus for the first three quarters of an inch. After that, I began picking up some fruity notes in the background.


Now a full third of the way in, I'm getting baking spices and cedar. Entering the two thirds point, I'm picking up an interesting tone of pine nuts, wood, and spices. The flavors are amazing, so far. The cigar is well balanced in its overall complexity. At this point, it is a medium bodied smoke that is performing at an exceptional rate.


The final third is marked with flavors ranging from spices, hints of  leather, cedar, and some light floral tones. The Phatso Tres Capas is a quality smoke that is sure to please. The expansive flavor profile will meet even the most discriminative palette and has something to offer everyone. I have absolutely no complaints with this cigar, other then I wish that I would have bought an extra box of these beauties to have in the humidor. 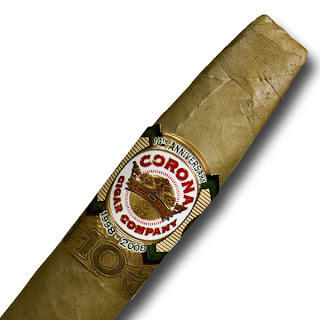 Corona Cigar Co. 10th Anniversary Wedge Candela
Like its Nicaraguan brother from CCC, The Dominican Candela wedge is a throwback cigar, originally popular back in the late fifties up to the mid seventies. It recently has seen a comeback and is being smoked more lately here in America. It was so popular, at one point, the Candela was known as the American Market Select.  The CCC's 10th Anniversary Wedge Candela is appropriately priced at $5.50 per stick for the 6x54, that I'm smoking.


A sweet aroma drips from this particular style cigar. It's very unique to the Candela.  If you've never smoked one, it's a pleasurable experience. My first several puffs were greeted with a woodsy flavor. They were quickly followed by a very unique flavor that I can't quite place. It is subtle and pleasant. Also, I'm getting a sweet cashew flavor on my palette with elusive tones of rum woven in.


While I'm not getting as strong of a sweetness as I did when I reviewed the CCC Nicaraguan Candela, sweetness is found in a more mild nature on this cigar. A two inch ash has formed now and the cigar is meeting my expectations. The profile is smooth and cool leaving a crisp burn. As you progress through the smoke, you will begin noticing a dry nutty aftertaste on your palette. There is a gentle creamy sweetness as well and it remains all the way to the nub.


The flavor profile is consistent with rich creamy and toasted notes. Interwoven are sweetness, dry cedar, hay, and cinnamon spice like components. I haven’t talked much about the wrapper, but it's smooth with a satin like finish. As you progress through the final stages of the cigar, the profile picks up a bit. A stronger medium bodied profile emerges, leaving notes of chard greens and several earthy tones.


The Corona Cigar Co. 10th Anniversary Wedge Candela is another winner for the company. If you have never treated yourself to this particular style of cigar, I would highly recommend doing so. It offers a nice change from your typical Dominican or Nicaraguan cigar and it has been my experience that it will leave you wanting to come back for more. 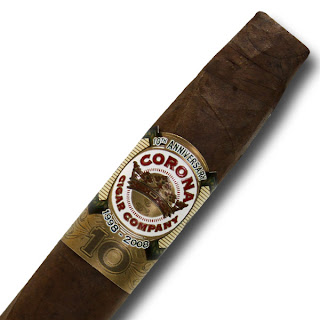 Corona Cigar Co. Dominican 10th Anniversary Wedge Maduro
This is the final cigar we will look at in the, CCC 10th Anniversary series. The Wedge Maduro has a beautiful Dominican dark Maduro wrapper. I'm anticipating rich earthy flavors and I'm ready to delve right into this beauty. Let’s investigate further....


I'm initially met with a coffee and cinnamon flavor that is strong, yet subtle. This cigar has a smooth characteristic. The draw is slightly tight, but in the range of still being enjoyable. Rich vegetal notes are in the background offering a unique smoking experience. Also, expect lots of cedar tones throughout the cigar.


The coffee tone remains consistent from start to finish and notes of chocolate are found mingling throughout. At the halfway point, the flavor profile picks up and a strong spice tone starts to tingle on the palette. Then it is closely followed up with red bell peppers, wood, and earthy tones. The ash is a full three inches plus and growing.


Rounding out this full bodied beauty, you will notice that the cedar notes get stronger. The dark chocolate is rich and enticing nearing the nub. Hints of sweet floral will transform into a smoking experience that will leave you wanting more.


All these cigars are exceptional and available at very reasonable prices. When you get the chance I would definitely recommend checking them out for yourself and see what you think. I would love to hear your feedback. Let me know your thoughts on twitter at @RealJoeBaker.

Also, for one week only recive FREE Shipping on all Corona Cigar Co. Dominican 10th Anniversary Boxes.  Offer expires July 15th, 2013.
Posted by Musings Of A Cranky Old Man at 7:09 AM