Corona Cigars of the Month Club

Corona Cigars of the Month Club 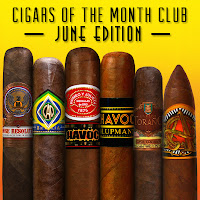 If you've ever joined any of the other barrage of cigar clubs who offer monthly subscriptions and found yourself disappointed with the quality of cigars, you're not alone. Not to mention, the hefty price attached to the disappointment. Corona Cigar has one simple guiding rule that guides the club, offer the best possible price and give the highest quality cigars. Today, we are looking at the selection you would receive for the month of June. 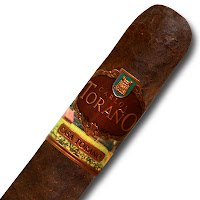 What started as a house brand for the Torano family, the Casa Torano was soon deemed too good to be kept as such. Originally, it was only made for rolling parties and special occasions, but it was put into production and has become a fan favorite. They used a smooth oily Ecuadorian Connecticut wrapper that is superb in quality. It is adorned with a gold, burgundy, and green cigar band that is classy and refined. After toasting the end of the cigar, you will notice a slight peppery foot. It quickly gives way and is replaced with a subtle walnut tone. Notes of cream intermingle with a smooth toasty draw.


At the first third mark, I picked up tones of hazelnut with a touch of fruit; Possibly apricots. The cigar has a nice spice aftertaste and is accompanied by very aromatic smoke. It is burning surprisingly slow for the size and remains spot on. The second third is marked with a slight increase in the spice tones. It is very enjoyable and a nice surprise as most Connecticut's don't have such complexity. The final third shows flavors ranging from pepper to the toasty creamy notes mentioned early. A fantastic smoke that works well as a good morning cigar and will pair nicely with your favorite cup of coffee. 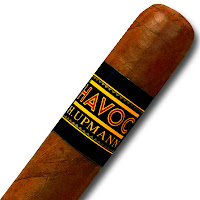 When you have been making cigars for one hundred-seventy years, you pretty much know what you're doing. H. Upmann, has broken the mold and new ground with the Havoc, to say the least. While it is a departure from what you would normally expect from them, don’t let that scare you. This cigar is a medium bodied powerhouse of a cigar. Let's explore things further and give you a better idea of what to expect.


My prelight inspection found a sweet earthy smell to the cigar. The wrapper has minimal veining and a dry matte look to it. The wrapper itself is a brown leathery San Adres Criollo '98. A fantastic choice and a personal favorite. I'm smoking the Toro size for this review, but it's also available in a Churchill, Robusto, and Belicoso size.


A strong cedar tone sets off the smoking experience. Hints of cream and toasted almonds will tantalize your palette. The cigars make up is finished off with a Dominican binder and Nicaraguan long fillers. The draw is somewhat airy, but smokes quite well. Billows of smoke are unleashed with every puff, leaving a grayish white ash behind. Tones akin to plums are found offering a nice profile change. Dry cedar is left on the palette while undertones of coffee, earth, and white pepper remain throughout. This is a top notch cigar that offers a indulgent and pleasurable smoking experience. 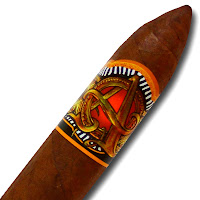 Distributed by Miami Cigar and Company, this little gem of a cigar offers a fantastic smoke. While one might think this cigar hales from Africa, given the name and the African themed cigar band complete with zebra stripes, It's actually made in Nicaragua. It offers a filler tobacco from Nicaragua, The Dominican Republic, Honduras, and some African Cameroon. The wrapper is a rare Nicaraguan Habano leaf.


As you would expect from a Nicaraguan cigar, the tobacco oozes with a earth and chocolate aroma. The cigar cuts perfectly leaving a clean precise edge. Upon lighting the foot of the cigar, it reveals a rich earthy overtone with tantalizing notes of dark coffee bean. A little farther in and red bell pepper is noted in the background, offering a nice contrast. At this point, an earth and spice tone is left on the palette, helping to give this a medium to full bodied profile. Cinnamon, vanilla bean, and cocoa are noted at the one third to halfway point. Coffee tones are becoming more consistent giving a nice contrasting tone with the cinnamon. The cigar finishes up with a stronger peppery profile. 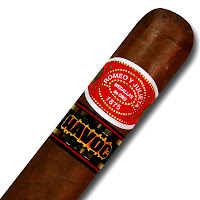 One of the biggest names in cigars has to be Romeo Y Julieta cigars. The Dominican version to its Cuban counterpart, meets and surpasses in some ways, the Cuban version. The Havoc takes a slight turn from the typical Romeo Y Julieta blends and heads to Honduras and is blended with Nicaraguan and Honduran tobaccos. The wrapper is a Nicaraguan grown Habano leaf. Its features offer a smooth crisp look. If you have smoked Romeo Y Julieta cigars over the years, you have come to expect top quality cigars. The Havoc will not disappoint you. It keeps with that same tradition offering premium tobaccos at a reasonable price. The cigars are all offered in large ring gauges 7x58, 6x60 and 5x56.


Lighting up, you will notice creamy tones with hints of spice. A touch of pepper is in the background and the draw is superb. A hint of tart is left behind on the palette and is complex in nature. This is a robust cigar and is probably considered medium body. The flavor profile continues on with a cedar and leathery tone.


At the halfway point, the cigar has been nothing short of fantastic. Large voluptuous clouds of smoke protrude from the foot of the cigar. The cedar tones have picked up and a crisp citrus note is found; a spice and pepper tone is left in your mouth. Meanwhile, the burn has been even, consistent, and cool.


Fleeting floral tones, coffee, black pepper, and toasty creamy flavors are all found on the last half. Another great blend from Romeo Y Julieta that’s sure to meet your expectations. If you enjoy medium bodied cigars, add this to your list of must try cigars. 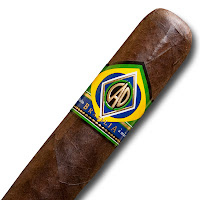 A few years back, I was lucky enough to win a box of these beauties at a local herf. At the time, they were new and I didn’t know much about them; I wasn’t sure what to expect. I quickly got acquainted and they have been a favorite of mine since. Let's explore things a little more and take a look at a few of my thoughts on the cigar.


After lighting up, a robust dark coffee tone greets your palette with a flavor that will awaken your senses. You will quickly find that this cigar is a powerhouse of dark rich tones. The wrapper is an oily Brazilian maduro, letting off a heavy earthy aroma. The binder and filler is made up of Nicaraguan tobaccos giving it a medium to full bodied profile. The cigar band is a colorful rendition of the flag of Brazil and it's set off nicely against the dark maduro wrapper.


Raw chocolate flavors along with a heavy cedar tone emerge one third of the way. A little farther in, I noticed a hint of pinto bean that was surprisingly nice. Heavy woodsy notes are found throughout leaving a dryness on the palette. At this point, the cigar is burning cool and clean leaving a dark gray ash in its wake.


Entering the final half of the cigar, leather, earth, dark chocolate, and subtle tones of sweet prunes are culminating for a smoking experience like no other. A full flavor finish is in store for all of you lucky enough to get to try this cigar. The burn was unsullied only to be outdone by the endless amounts of aroma oozing from the cigar.  A top rated maduro like no other awaits you in this fine smoke. 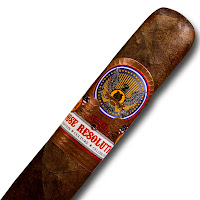 In addition to the above cigars, you will also receive one of Corona's very own, the House Resolution.  House Resolution 1639 - The Traditional Cigar Manufacturing & Small Business Jobs Preservation Act is a pro-active bill written to prevent the FDA from taking away your freedom to purchase and enjoy cigars.

Every box of House Resolution cigars sold helps support our efforts to make HR1639 a law that will keep the FDA from coming between you and your beloved cigars. So here is your chance to smoke a great cigar, at a reasonable price, and bring some attention to HR 1639 every time you light one up.
Posted by Musings Of A Cranky Old Man at 11:55 AM