New Year's Eve is coming up and it's another reason to celebrate with a great cigar. We have the perfect cigar for any occasion! Come ask our knowledgeable staff to help you find a cigar to fit your mood whether you're going to party or having a barbecue.
Posted by AndrewH@coronacigar.com at 12:25 PM No comments:

These are the perfect gift for the aficionado in your life. It comes in 3 colors; magascar, blue, and white.

Very little is known about the blend, but they are a touch more mild than a regular Opus X with plenty of flavor. The Angel's Share blend was named due to the fire Fuente had, stating that the tobacco that went up in smokes was the "Angel's Share" a term that distillers use for the alcohol lost to evaporation.

The Angel's Share are currently only available in this 4 pack and in the limited edition 50 ct Prometheus humidors, which we are also fully stocked on! 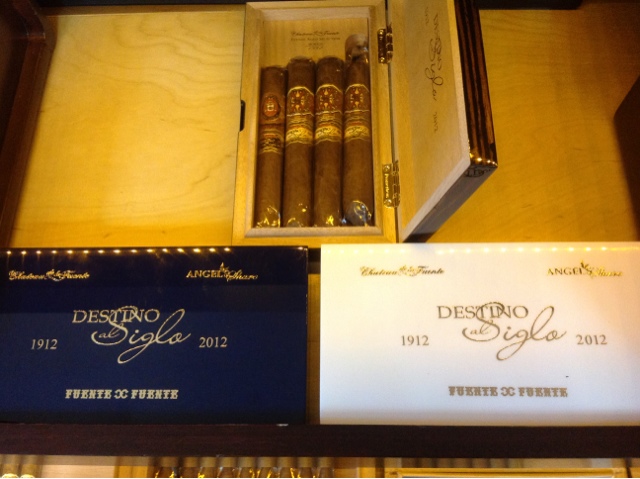 Posted by AndrewH@coronacigar.com at 10:40 AM No comments:

We have another awesome event coming from the guys at Drew Estate, the One and Only Jonathan Drew and Marvin Samel will be here along with the newest DE addition Willie Herrera. Come have a blast with some fantastic guys and get some great deals on all Drew Estate products. We will be freshly stocked up!

There will be great deals, raffle prizes and even a bourbon and whisks tasting! 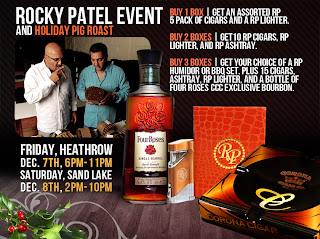 This Friday and Saturday Corona Cigar Co Heathrow and Sand Lake have a special event planned for our guests.  We are going to have a holiday pig roast Friday, 6:00-11:00 at Heathrow and Saturday 2:00-10:00 at Sand Lake.   During the pig roast, Rocky from Rocky Patel Cigars is going to be having a cigar event at both locations.  There will be great deals on Rocky Patel cigars where the more you buy the more you get!

These deals are astronomical!  There is no better time to get your holiday shopping done than at one of our cigar events.
Posted by AndrewH@coronacigar.com at 3:12 PM 1 comment: