In the cigar world there are certain names, celebrities that stand out amongst the crowd that everyone knows and loves.  The Fuente family is one of those families, producing cigars for the last 100 years in which they have seen major setbacks and huge gains in notoriety throughout the years.  The iconic Arturo Fuente cigars are highly sought after, and often raved about. 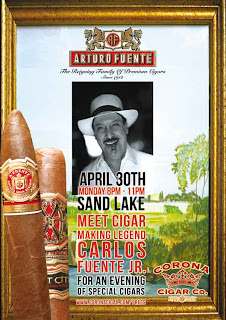 The Fuente family is one that every cigar smoker, new and old, knows about.  Whether it’s stories from whoever introduced them to smoking, or in publication, it is obvious that the Fuente brand is one of global recognition and admiration.  But even with such brand power, the Fuente’s refuse to ride the coattails of past success; they make sure their product lives up to the Fuente family name.  Whether it’s an 8-5-8 or an Opus X, you know you are going to get an exceptional cigar that was well worth the money spent.

We are pleased to announce that on Monday, April 30th from 8:00 PM to 11:00 PM Carlos Fuente Jr will be at our Sand Lake location for a very special night.  Meet one of the legends of the cigar industry and have a Fuente cigar with him!
Posted by AndrewH@coronacigar.com at 10:01 AM No comments:

I'm sure you've heard by now that the FDA is trying to regulate your ability to purchase and enjoy a cigar. So I want to let you know about a petition I started on "We the People", a new feature on WhiteHouse.gov, and ask for your support. Will you add your name to mine?

You can view and sign the petition here: http://wh.gov/Qtz

I'm headed to Washington this week to continue meeting with members of Congress and ask them to co-sponsor HR1639/S.1461- The Traditional Cigar Manufacturing & Small Business Jobs Preservation Act. This bipartisan bill clarifies the 2009 Tobacco Control Act and states that Congress did not intend for the FDA to expand its regulations to include Premium Large Cigars. As of today, there are 169 members of Congress and 7 Senators that have stood up for freedom by cosponsoring HR1639/S.1461...is your Representative one of them? You can view the list of cosponsors here http://blog.coronacigar.com/2012/04/white-house-petition.html

Keeping the FDA out of your humidor is a monumental task and to pass a bill in Congress, we need your help. Please sign the White House petition and when you are finished, visit www.CigarRights.org and sign the petition to the U.S. Congress. It only takes a few minutes and every petition helps elevate our issue in Washington.

Here's some more information about our White House petition:

Not Allow The FDA To Regulate Premium Cigars

The FDA is considering the creation of regulations for the premium cigar industry. These regulations will jeopardize over 85,000 American jobs,
destroy America's "mom & pop" premium cigar retailers & manufacturers, and risk over 250,000 jobs in Latin American that produce
cigars, impacting the economic/political stability in the region.

We hope you will stand up for small businesses that dot Main Street America & recognize that premium cigars are enjoyed by adults, are not addictive
and therefore do not conform to the Congressional intent of the Family Smoking Prevention & Tobacco Control Act.

Tell the FDA to leave our premium cigars alone. With this nation's more pressing issues, harming my simple ability to enjoy a cigar should not be a
priority of the government.


Chairman of the Board
Cigar Rights of America
Posted by La Republica at 11:59 AM No comments: 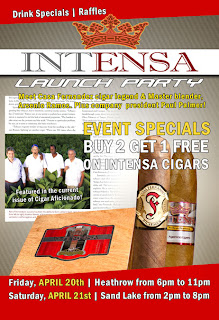 We are pleased to announce a special event happening on April 20th and 21st, the Intensa Launch Party!  This cigar is a Corona Cigar Co exclusive, blended by none other than Aresenio Ramos, Casa Fernandez’s Master blender.  This Puro Nicaraguan cigar features all Aganorsa tobacco and offers a full bodied experience without a harsh kick.  The Intensa has hints of spice, wood, and earth; together embodying the definition of a complex flavor profile, at a fraction of the cost!

Not only are we having a buy 2 get 1 free on Intensa cigars of all sizes, we are also going to have Arsenio Ramos and Casa Fernandez president Paul Palmer at the event!  We are planning to celebrate in style with the creators of this exceptional cigar, and we will be having drink specials as well as raffles for the Launch Party.  So make sure you don’t miss out on this awesome launch party, Friday April 20th at Heathrow 6pm to 11pm, and Saturday April 21st at Sand Lake 2pm to 8pm.
Posted by AndrewH@coronacigar.com at 9:42 AM No comments:

On April 26, 2010, December 20, 2010, July 7, 2011, and again on February 13, 2012 the U.S. Food & Drug Administration publicly posted their intent to regulate cigars in the Federal Register, so it is incumbent upon the cigar enthusiasts of the United States to voice their opposition to any proposed new regulation of premium/traditional cigars by the United States Government.

The U.S. Food & Drug Administration answers to one boss - The White House. Now that tens of thousands of this nation's cigar enthusiasts have voiced their opposition to Congress, it's time to send a message to the Office of the President. It's time for President Obama to tell the FDA - "Stay out of America's humidors!"

H.R. 1639 has been filed in the U.S. House of Representatives; and a companion bill, Senate Bill 1461, has been filed in the Senate. Both are filed under the banner of the Traditional Cigar Manufacturing and Small Business Jobs Preservation Act . This bi-partisan legislation would decree that premium/traditional cigars should be off limits to FDA regulation and, 'to clarify the Food & Drug Administration's jurisdiction' in the 'sale, manufacturing and distribution of traditional and premium cigars.'

Such legislation could have a profound impact on protecting the industry, from the fields and factories of Central America , to the supply-chain throughout this nation, to the community tobacconist, to enjoying a cigar in the local shop, club or back porch.

With over 85,000 American jobs associated with the premium/traditional cigar business, this is an issue of economic stability for thousands of Main Street America small businesses. The community tobacconist is an institution that spans the history of the nation. The federal government has no business threatening them with new regulations, user fees, and efforts that smack nothing short of modern day prohibition.

We can assure you, nothing could rip the soul of the cigar industry apart, like FDA actions. For example, some of the (again) hypothetical possibilities, but that are not beyond the realm of reason include: No more walk in humidors (Canadian model); Limits on advertising and promotions; Banning the very word cigar or tobacco; Manufacturers having to submit blends to FDA for "testing," before heading to your local shop - imagine the impact on boutique cigar makers; Adverse impact on flavored tobacco products that are made for adults; And price impact due to new fees on manufacturers. This, is the short list.
Please click here to learn more!
Click here to sign the petition!
Posted by thomas@coronacigar at 3:59 PM No comments: