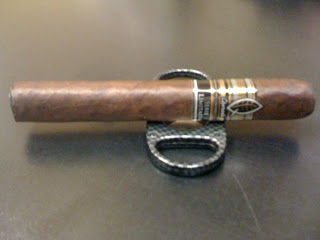 Quesada isn't a new brand in the cigar world; in actuality it comes from one of the most established cigar families, but normally they are represented under the Fonseca brand. This is the first time the Quesada Family has used their last name for a cigar, but 35th Anniversary is an important milestone. The 35th Anniversary marks when the Quesada Family became the first cigar company to setup in the Dominican Republic's free zone.

Manuel Quesada, head of the Fonseca Cigar Co., played a very little role in the creation of he cigar; his daughters secretly were creating the cigar to surprise their father. A rare Arapiraca grown in Ecuador was selected for the wrapper for its oily, chocolate complexion. The filler is comprised of 3 tobaccos: Dominican Cuban Criollo from 2008, Dominican Vuelta Arriba ligero and Nicaraguan Esteli ligero.

The Quesada 35th Anniversary is a medium to full bodied journey through a complex array of flavors. The beginning boasts impressive strength married with espresso and cedar. Those flavors hang through the entire smoke, but every so often notes of hay, white pepper and anise dance across the palate. These won't be around forever, visit at http://www.coronacigar.com/ or call us at 1-888-70-CIGAR and snag up what you can!
Posted by Alex Diaz, Copyright Manager of Corona Cigar Co. at 7:36 PM