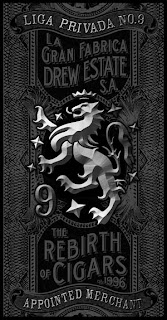 With the recent delays in the Liga Privada T52 shipments I have been out of and craving a Liga Privada T52. Our most recent shipment of Liga's was a batch of the No. 9's and I have been smoking these in the absence of the T52's. Now I love the No. 9 as well, but the T52 is my favorite. This led me to ask some of my co-workers and customers which Liga they liked the best. I didn't keep a record of the answers so this is far from scientific. What I did learn is that which Liga you like the best can tell you a lot about the type of cigar you prefer.

I categorize the Liga Privada No. 9 as earthy and the Liga Privada T52 as spicy. Whichever of these two you like better, that is the overall cigar note that you prefer. I know there are a lot of other notes in cigars, but if you want to figure out if you like earthy better than spicy, smoke a Liga No. 9 and a Liga T52 and you will have your answer. For the most part my un-scientific poll had the cigars neck and neck. My vote for the T52 put it in the winning category. Stalk cut wrapper can't be beat.