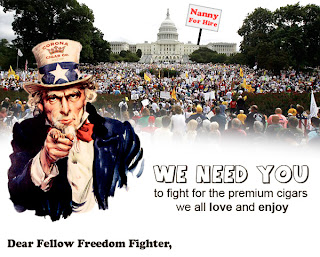 Hey FDA...KEEP YOUR HANDS OFF MY CIGARS!

Right now there is an active movement by the nanny-state, anti-tobacco zealots that want to take away your God given right to enjoy a cigar. If these prohibitionists get their way, the FDA will expand their cigarette & smokeless tobacco regulations to include cigars. So what would this mean for you?

• All flavored cigars such as rum, cognac, bourbon, vanilla and coffee would be banned.

• Cigar events with free cigars would be banned.

• Cigar advertising would be limited to black and white "tombstone" ads.

• New user fees (taxes) would be imposed on your cigars to fund the beurocrats at the FDA to regulate your cigars.

• Special release and limited edition cigars would be a thing of the past since all cigars would have to undergo extensive (and expensive) testing and be approved by the FDA.

• Nicotine levels in cigars could be regulated to near zero levels...bye bye strong cigars.

Now if all of this has got your freedom loving, proud to be an American blood boiling, there is something you can do about it. Right now there is a bill in Congress (H.R. 1639) called "Traditional Cigar Manufacturing & Small Business Preservation Act". This bill would clarify the Tobacco Control Act so that the premium cigars that you and I love would be "hands off" by the FDA.

To get this bill passed, we need your help. Call, write, email or meet your congressman and senators and ask them to support H.R. 1639. We have a handy link on CoronaCigar.com where you can easily email your elected officials.
Courage,

Click Here and Urge your Members of Congress to Co-Sponsor HR1639!
Posted by Neal@CoronaCigar at 7:20 PM