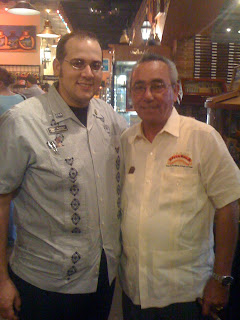 So Don Pepin Garcia was at the Sand Lake store today for an event. If you don’t know who he is, there is a possibility he probably makes one of your favorite cigars. Not only does he blend and manufacture cigars under his own name, he also blended and manufactured Tatuaje, Cabaiguan, La Aroma de Cuba, 601, Murcielago and that’s to just name a few.

He and I walked through the cigar where we conversed about the industry in general. I asked him many questions about cigars, but some that really stood out where his thoughts on the industry. He said it is a challenge to create a unique blend that no one else has done before. He says he is constantly trying new hybrids of tobacco to create the next best cigar. His greatest success so far was the wrapper used on both vitolas of the My Father cigar. The original My Father utilizes an Ecuadorian Habano-Rosado hybrid and the My Father Le Bijou incorporates a wrapper called Pello de Oro (This wrapper is extremely difficult to grow because it is prone to many agricultural diseases).

I was surprised when Pepin started to ask me about other company’s cigars and how well they were doing. We stopped in front of the NUB cigars and he told me that it is very innovative. He is very surprised by the response of the NUB cigar sizes and they can’t be very cost effective because the amount of tobacco that they cram into each cigar. He also told me that walking through the store that you would be surprised to find out that many cigars are tied to each other; Tobacco growers might have an exceptionally good harvest will sell the same wrapper to 2 different manufactures but from 2 different primings.

In the short amount of time Don Pepin Garcia has been in the industry, he has become one of its shining stars. He has been leading the way in innovative cigars constantly scoring high marks in cigar publications. Not only that, he has been teaching his son, Jaime Garcia, the tricks of the trade and he too will be one of the industry greats. Check back soon as I’m going to write up the cigar I rolled during the Pepin event!!!
Posted by Alex Diaz, Copyright Manager of Corona Cigar Co. at 10:10 PM