Celebrate St. Patrick's Day: or What is Candela? for 500 Alex 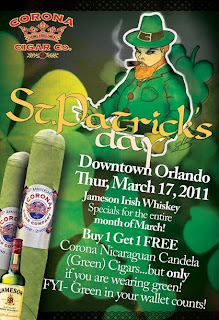 St. Patrick’s Day falls on Thursday the 17th this year and the tradition calls for wearing green. The thought popped in my head: Why not smoke green? And that's exactly what I am doing, a few days early, but I have big plans for St. Patrick's Day. This blog will be the research into which Candela cigars I will be smoking on St. Patty's.

Candela cigars were once the most popular cigar in the United States. They were so popular that the wrapper was dubbed American Market Selection (AMS). They fell out of favor in the 1970's but they seem to be making a resurgence with the popularity of Illusion's candela line, the small run Viaje WLP Candela, and the first full-bodied Candela, the Camacho Corojo Monarca Candela (Which I have nicknamed The Hulk).

Normally tobacco is cured over a 50 day period. The leaves loose the green color and slowly turn brown. Candela leaf retains its green color because the tobacco is flash cured using heaters thereby retaining the chlorophyll content. This tobacco is often mild and unique if flavor.

Over the next couple days I'll smoke and post various candelas Corona Cigar Co. has to offer. Tonight (in the next few hours) I'll start with our very own, very delicious, Corona Nicaraguan 10th Anniversary Candela.
Posted by Neal@CoronaCigar at 7:10 PM